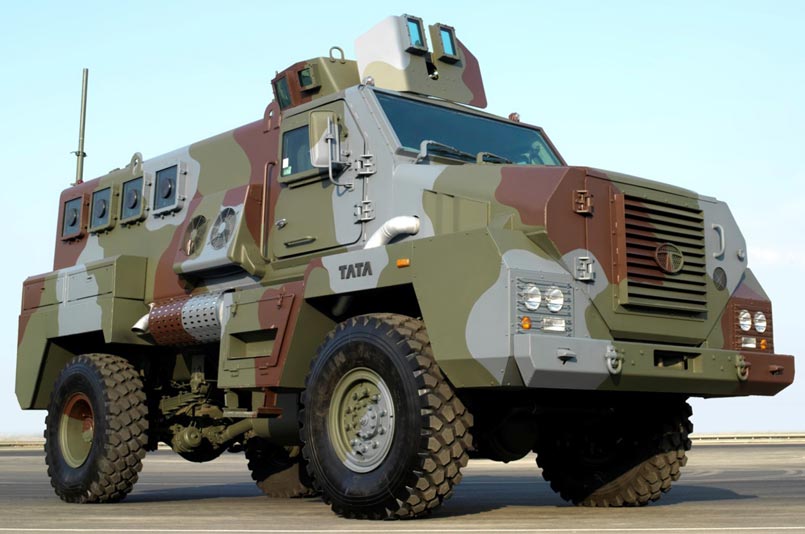 Supplied over 1.5 Lakh vehicles to the Indian Military, Para-military Forces and State Police forces till now

Is the only Asian Company to offer a full range of wheeled Defence vehicles, including a combat range

Tata Motors, India’s largest private sector land mobility player in the Defence space in India, will showcase its two flagship vehicles that have substantial export potential at the BIMSTEC Nations Summit 2018 in Pune. The vehicles that will be exhibited to the Army Chiefs and nearly 400 plus army officers from BIMSTEC Nations include the Tata 4X4 Mine Protected Vehicle (MPV) and the WhAP8x8 ICV (CO developed with the DRDO) demonstrates Tata Motors expertise in the combat range and its commitment to the ” Make In India For Defence” policy of the Government of India.

Commenting on the occasion, Mr. Vernon Noronha, Vice President, Defence & Government Business, Tata Motors Limited said, “Our defence mobility portfolio has grown from strength to strength, offering a range of combat, armoured, combat support & logistics vehicles that have been popular in supporting the military, paramilitary & police forces in their multifarious operations.Our International customers are aware that Tata military vehicles in use by the Indian Armed Forces are inducted by them Only after grueling pre-purchase testing ( spread over years in different terrain and climate conditions) to exacting military standards . This also helps Tata Motors build confidence with foreign militaries on durability and maintainability aspects.

“Our products on display – Tata 4X4 Mine Protected Vehicle (MPV) and the WhAP 8×8 Infantry Combat Vehicle is a validation of our truly indegeneous expertise to offer mobility solutions for counterinsurgency and combat operations of Security forces in India and abroad “, he further added.

Tata Motors has been a proud partner to the Indian Armed Forces since 1958, having supplied over 1.5 lakh vehicles to the Indian Military, Paramilitary forces and Police Establishments. In addition, Tata Motors is also a leading supplier of defence solutions to SAARC, ASEAN and African regions. The company has also established itself as a supplier of specialist vehicles for UN peacekeeping missions

Tata Motors Limited (BSE: TATAMOTORS), a USD 45 billion organisation, is a leading global automobile manufacturer of cars, utility vehicles, buses, trucks and defence vehicles. Part of the USD 100 billion Tata group, Tata Motors is India’s largest and the only OEM offering extensive range of integrated, smart and e-mobility solutions. Tata Motors has operations in the UK, South Korea, Thailand, South Africa, and Indonesia through a strong global network of 109 subsidiary and associate companies, including Jaguar Land Rover in the UK and Tata Daewoo in South Korea.

With a focus on engineering and tech enabled automotive solutions catering to the future of mobility, Tata Motors is India’s market leader in commercial vehicles and amongst the top four in the passenger vehicles market. With ‘Connecting Aspirations’ at the core of its brand promise, the company’s innovation efforts are focused to develop pioneering technologies that are sustainable as well as suited to evolving aspirations of the market and the customers. Tata Motors strives to bring new products that fire the imagination of GenNext customers, fueled by state of the art design and R&D centers located in India, the UK, Italy and Korea. Internationally, Tata commercial and passenger vehicles are marketed in countries, spread across Europe, Africa, the Middle East, South Asia, South East Asia, South America, Australia, CIS, and Russia.

Tatamotors14 February, 2018
You favourite #LevelNex rockstars p a r i k r a m a will play LIVE soon from the TATA pavillion Hall No. 14, 3 PM onward during #AutoExpo2018. Keep #RollingWithNexon, only on twitter, to know more. Rolling Stone India http://bit.ly/2EpMoqI

Tatamotors14 February, 2018
A rocking #LevelNex Valentine's Day indeed! Watch Parikrama perform LIVE at 3 PM at the Tata Pavillion Hall no. 14 during the #AutoExpo2018. Keep #RollingWithNexon to know more! Exclusively on Twitter. http://bit.ly/2F3Jysw
#LoveForYodha We asked ladies "What qualities of #TataYodha would they like to see in their Valentine?" We got a fe… https://t.co/hrSbY726IC
@Tatamotors14 February, 2018

Tatamotors14 February, 2018
#LoveForYodha We asked ladies "What qualities of #TataYodha would they like to see in their Valentine?" We got a few reactions from guys too! #AutoExpo2018 #ValentinesDay

Tatamotors13 February, 2018
We got some amazing entries from you all for #TrucksAreCool! Here are the ones we absolutely loved. #AutoExpo2018 #ConnectingAspirations

Tatamotors13 February, 2018
Second last day to get the #LevelNex experience of the Tata Nexon. Now on display at the #AutoExpo2018

Tatamotors13 February, 2018
Tiago EV and Tigor EV's Harman™ infotainment system, with 8 speakers, ensures you're grooving all the way to your destination. #ItsFantastico #TigorStyleBack